“A united Europe was not achieved and we had war. Europe will not be made all at once, or according to a single plan. It will be built through concrete achievements which first create a de facto solidarity”.

These words pronounced by the French Minister of Foreign Affairs, Robert Schuman, 70 years ago, remain true till our days. Europe has been built, and it is still being built step by step, by concrete achievements affecting the daily lives of 446 million European citizens, uniting them every day a little more in a common fate, based on peace among peoples.

The Schuman Declaration did not happen all at once either. At least nine projects emerged between April 17 and May 6, 1950, before Robert Schuman delivered the official speech in the Salon de l’Horloge on May 9. Admittedly, Schuman’s devotion quotes did not even appear in the very first version of the project presented on April 17, 1950. Perhaps even more surprisingly, Robert Schuman was not even the direct recipient of the project proposals at the beginning! Developed in April 1950 by Jean Monnet, then by the general planning commissioner and his close collaborators, the project was submitted to Robert Schuman only in late April 1950.

According to the small steps strategy, Monnet’s project had to adapt to the economic and politico-diplomatic circumstances of the time: with the initial draft of the project of April 17, 1950, the Franco-German production of steel and coal was placed under an “International Authority”, the sixth version of April 28, finally reported that the production was placed under a “Common High Authority, in an organization open to the participation of other European countries” and this became the final formula used in the speech of May 9. The rather strong statement of the first draft that “the unification of economic systems requires the transfer of essential products or sectors of the sovereignty of States to international organizations” no longer existed in the second version of the project.  The sentence that became worship, affirming that thanks to the solidarity of production established by this project “any war between France and Germany becomes not only unthinkable but materially impossible” made its concrete appearance only in the fifth version of the project of April 27. Europe did not happen all at once …

Persuaded by the need to “change the course of events” but also “the minds of men”, Jean Monnet sent a long note to Robert Schuman on May 1, 1950 affirming the need for a “broad, real, immediate and dramatic action that changes things and brings in life the hopes that peoples are no longer believe” because according to him “the peoples of Europe hear only words”. And for Monnet, above all, it was essential “that Europe makes a dynamic contribution that it shows itself and the American position that it believes in its own future, that Europe is being created, it is being created as it has never existed”. France has its place in this new construction and, according to Monnet, it has everything to win in it!

Convinced by Jean Monnet’s idea, Robert Schuman became the promoter of the project and publicly announced the method on May 9, 1950, which has since become “Europe Day”. The British Embassy in Paris announced the United Kingdom’s first reservations about the Schuman Plan on May 26, this was confirmed by a British press release of June 3, 1950, definitively declining the French initiative. Meanwhile, on the same day, French, German, Belgian, Italian, Luxembourgish, and Dutch governments shared their impatience for the opening of inter-state negotiations for the implementation of the plan. These were launched by Robert Schuman on June 20, 1950, in the Salon de l’Horloge at the Quai d´Orsay in Paris.

And for those who did not alre 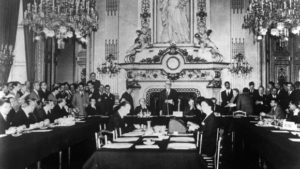 ady know: it is often the photo of this same event of June 20 used to “illustrate” the very solemn moment of the Schuman speech of May 9, 1950, that no photographer was finally able to capture, because of the absence of the press and television on that day! 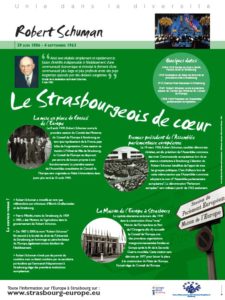 > Our exhibition on Robert Schuman (fr)