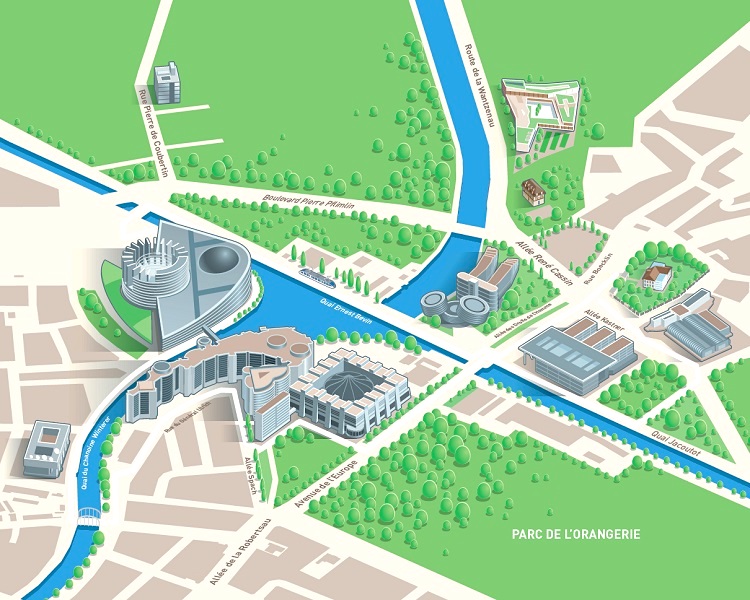 “This city which, more than any other one, was the victim of the European nations’ stupidity which thought to solve their problems with the war, now has to embody the symbol of reconciliation and peace”
Ernest Bevin, Secretary of State for Foreign Affairs, UK, 1949

City at the heart of Europe

The city’s location makes it a practical choice with no less than 8 European countries located within 500 kilometres of Strasbourg: Germany, Austria, Belgium, Italy, Luxembourg, the Netherlands, Switzerland, and the Czech Republic.

Multicultural city with a turbulent past

Sometimes French, sometimes German, Strasbourg changed its nationality four times in 75 years, between 1870 and 1945, due to wars and conflicts between France and Germany. However, despite the city’s turbulent past, the languages and cultures of the two countries came together to make the multicultural city we know today.

A city that symbolises French-German reconciliation and peace in Europe

For many years, Alsace was the source of many conflicts between France and Germany, and Strasbourg, situated right on the border, suffered greatly as a result. After World War II, many European countries wished to reunite and build a lasting peace, so that another war in Europe would become not just impossible, but unthinkable. And so it was in Strasbourg, in 1949, where the Council of Europe was established to encourage cooperation between European countries, in order to better respect democracy and to defend human rights. Several years later, the European Parliament would also be set up in Strasbourg. This was the birth of Strasbourg’s European quarter.

1950: The Convention for the protection of Human Rights and Fundamental Freedoms, better known as the European Convention on Human Rights, is adopted.

1952: The first meeting of the Common  assembly of the European Coal and Steel Community (ECSC), renamed “European Parliament” in 1962.

1959: The European Court of Human Rights is established.

1977: Inauguration of the “Palais de l’Europe”, which houses the Council of Europe.

1995: The European Parliament names the first European Ombudsman, whose offices are found in the Salvador de Madariaga building in Strasbourg.

1995: Inauguration of the “Palais des droits de l’Homme”, the seat of the European Court of Human Rights.

1997: The Treaty of Amsterdam declares that Strasbourg is the official seat of the European Parliament.

1999: Inauguration of the Louise Weiss building, where the European Parliament holds its plenary sessions.

2008: Inauguration of the “Agora” building, the Council of Europe’s new general building.

2014: Inauguration of the Lieu d’Europe.

2015 : The European quarter of Strasbourg won the European Heritage Label.