Menu
“This city which, more than any other one, was the victim of the European nations’ stupidity which thought to solve their problems with the war, now has to embody the symbol of reconciliation and peace”
Ernest Bevin, Secretary of State for Foreign Affairs, UK, 1949

Strasbourg’s function as a European capital dates back to May 5, 1949. On this date, 10 nation-states (Belgium, Denmark, France, Ireland, Italy, Luxembourg, Norway, the Netherlands, the United Kingdom, and Sweden) signed the Statute of the Council of Europe, an intergovernmental organisation founded on human rights, in London at Saint James Palace. Robert Schuman signed for France. As proposed by the English Secretary of State for Foreign Affairs, Ernest Bevin, the Council was seated in the city of Strasbourg in order to symbolise the French-German reconciliation. However, E.Bevin was suspected of trying to distance the Council of Europe from European centers of activity in order to stifle it. This suspicion instantly disappeared during the first session of the Council in summer 1949 at the Palais Universitaire: the collaboration was a success and Strasbourg proved to be the ideal city for this newly created European organisation.
In accordance with Article I of the Statute of the Council of Europe, the goal of the organisation is to, “achieve a greater unity between its members for the purpose of safeguarding and realising the ideals and principles which are their common heritage and to promote their economic and social progress”. At the beginning, the Council’s competences were intended to be very general, including domains such as human rights, culture, economy, environment, or juridical cooperation (except defense issues). The Council of Europe is composed of two main bodies: a Committee of Ministers, the organisation’s decision-making body, composed of the Foreign Affairs Ministers (or their representatives) of the member states; and a Consultative Assembly (which became the Parliamentary Assembly in 1994), which is the deliberative organ of the Council, composed of parliamentary representatives of each member state, elected or designated by national parliaments. A General Secretary, located in Strasbourg, assists these two organs.
From 1950, the Council of Europe’s aspirations became reality with the adoption of an international treaty of unprecedented importance, the Convention for the Protection of Human Rights and Fundamental Freedoms, called “the European Convention on Human Rights”. This Convention defines the rights and freedoms that all signatory states promise to guarantee to individuals under their jurisdiction, from the right to life and freedom of expression, to the prohibition of torture and discrimination. The European Convention on Human Rights does not concern itself with the definition of rights and fundamental freedoms, but it is an authority for overseeing the respect of these freedoms and rights in the signatory states. Three institutions share the responsibility of enforcing this Convention: The European Commission of Human Rights (1954), the European Court of Human Rights (1959), and the Committee of Ministers of the Council of Europe. The Commission is essentially in charge of filtering submitted demands, while the Court works on concrete cases. The mission of the Committee of Ministers is to ensure that all member states are abiding by the Convention on Human Rights. Due to the growing number of requests and the ever-increasing duration of court procedures, a single court was created in 1998 (the European Court of Human Rights). This new court replaced the Commission of Human Rights as well as the initial court of 1959.
The member states of the first Council of Europe could choose to ratify or not the European Convention on Human Rights, which was enforced in 1953. Finally, the Council reached a consensus that membership should require the acceptance of all of the Convention’s disposals.

The first session of the Committee of Ministers of the Council of Europe took place at the Hôtel de ville in Strasbourg on the 8th of August 1949, and the first session of the Consultative Assembly was organised at the Palais Universitaire two days later, on the 10th of August 1949. But the Alsatian capital started the construction of a real “Maison de l’Europe” in front of the Parc de l’Orangerie to welcome, temporarily, the first intergovernmental organization founded in Europe after the end of the Second World War.
Beginning in 1952, the Council of Europe shared its building with the common Assembly of the European Coal & Steel Community (ECSC) which organised its sessions in the Alsatian capital as well. The choice of Strasbourg was a practical one because many European deputies were members of both assemblies. Furthermore, the Council of Europe auditorium had the advantage of being able to translate discourses into several different languages.
However, the temporary offices of the Council of Europe quickly proved to be rather unfitting for both institutions. The Council continued to admit new members from the European continent and the success of the organisation was strengthened with its move to a new location on the 28th of January 1977, in the Palace of Europe, designed by French architect Henry Bernard. The building was symbolically designed to “assert, with its structure and its external aspect, that union makes strength; while showing, with its peaceful and smiling internal atmosphere where curves dominate, the confident cordiality necessary for free circulation of ideas”. The 64 000 m² building contains 1000 offices, 17 conference rooms, and a centrally-located circular auditorium with 600 seats. The European Parliament, growing from 78 representatives from the six signatories countries in 1951 to 434 in 1981, with the accession of Greece, moved its location as well, to the Winston Churchill and Salvador de Madariaga buildings in the 1980s. However, the Council of Europe continued to share its offices with the European Parliament until 1999.

The creation of the Palace of Europe marked the birth of the European district in Strasbourg. Over several decades, Strasbourg witnessed the concentration of buildings with a European vocation in the North-Eastern part of the city, on the banks of the Ill river. The Human Rights Palace, designed by the British architect Richard Rogers, was inaugurated in 1995. The front of the building is supposed to evoke the “balance of justice”, and with its conception, the architect sought to “realise a building with lines resolutely contemporary and symbolic which associate the rule of law with the transparency principle”. Other buildings with European vocations were built. In front of the Human Rights Palace, the Louise Weiss building, the new building of the European Parliament, was inaugurated by Jacques Chirac in 1999. This opening puts an end, temporarily, to the long battle concerning the official seat of the Parliament. The Edinburgh agreements in December 1992 tried to confirm the Alsatian location of the Parliamentary Assembly but the construction of the Espace Léopold in Brussels and the increase of small sessions in the Belgian capital continued to feed the debate. During the intergovernmental conference in 1997, France finally presented an amendment in order to fix the seat of the different European institutions “once and for all”. As a result, the treaty of Amsterdam contains a protocol which officially confirms Strasbourg as the location of the European Parliament. 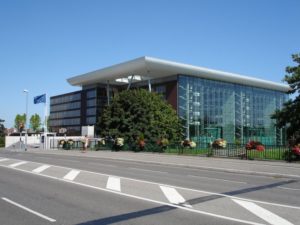 Since the construction of the “Maison de l’Europe” in front of the Parc de l’Orangerie, the European district of Strasbourg continued to grow. A new administrative building of the Council of Europe of 22 000 m2 just opened and the new building of the European Directorate for the Quality of Medicine and Healthcare, an organ of the Council of Europe, was inaugurated in March 2007. Fifty years of European construction has left marks…especially in Strasbourg.

In May 2014, the Lieu d’Europe opened to the public. It is a place of education in European citizenship, with a vocation of making Europe known to citizens and strengthening their feeling of belonging to a community of values.

In December 2015, Strasbourg won the European Heritage Label. Created in 2007 by the European Commission, it enhances the European dimension of cultural goods, monuments, natural or urban sites and memorial sites, which are symbols of European heritage and history.