Menu
Pierre Pflimlin: a man of the Fourth Republic 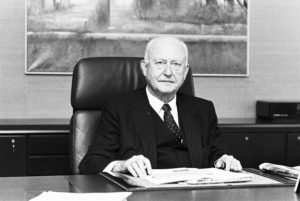 After the armistice in 1945, Pierre Pflimlin put an end to his career as a magistrate in Metz and returned to Strasbourg. It was by chance that he found himself caught up in the political life. The local political life had a fresh start with the creation of the “Parti Républicain Populaire” (Popular Republican Party) which decided to join the Popular Republican Movemen (MRP) chaired by Georges Bidault. During the municipal elections of September 1945, as a result of an alliance with Charles Frey, future mayor of Strasbourg, who belonged to the “Parti Démocratique du Bas-Rhin”, Pierre Pflimlin was elected to the Strasbourg City Council.

The elections for the first National Constituent Assembly took place the following month. The MRP chose as “young colt” the completely unknown newcomer Pierre Pflimlin and placed him the fourth on the list. The MRP list won five seats and two months after his return to Strasbourg, he was elected as a member of the National Constituent Assembly. Pierre Pflimlin found Robert Schuman (future founding father of the European Union) in the Assembly and in the MRP. It was under his guidance that the Alsatian deputy took his first parliamentary steps.

In 1946, Pierre Pflimlin was appointed Under-Secretary of State to the Minister of Public Health and Population. He subsequently participated in numerous governments of the Fourth Republic. Robert Schuman appointed him Minister of Agriculture in 1947 and he had the difficult task of modernising agriculture and putting an end to the post-war food shortages. Despite governmental instability, with five successive governments, Pierre Pflimlin spent three years at the head of this ministry. Minister for Trade from 1951 to 1952, Minister for Overseas France from 1952 to 1953, he was also Minister of Finance and Economic Affairs from 1955 to 1956 and from 1957 to 1958 before becoming President of the Council on 13 May 1958 under particularly dramatic circumstances. When he took over as President of the Council, Pierre Pflimlin knew that in order to solve the problems in Algeria, it was necessary to quickly embark on a reform of the State and the Constitution. But the new President of the Council had the reputation of having a “liberal” vision on the Algerian matter. Pierre Pflimlin could not resist the climate of insurrection in Algeria and negotiated the transfer of power to the General de Gaulle in all legality. He resigned on 28 May.

In 1962, Pierre Pflimlin was again involved in the government of Georges Pompidou, wishing to influence the General’s positions towards Europe from within. Barely a month after his appointment, serious disagreements stemming from their differing visions for Europe led him to break with General de Gaulle. Pierre Pflimlin will then dedicate the rest of his life to other projects dear to his heart: his city (Strasbourg) and the European integration.

Europe was Pierre Pflimlin’s greatest conviction. Having experienced both – the First and Second World Wars – he was convinced that the establishment of a political Europe was the best way to establish lasting peace between the two hereditary enemies, France and Germany. Along with Robert Schuman, he was a fervent advocate of Franco-German reconciliation and European integration. Very impressed by Robert Schuman’s historic declaration creating a European Coal and Steel Community, he tried to contribute to the European edifice under construction by proposing in June 1950 the creation of a “European organisation of the main agricultural markets” (better known as the “Green Pool”). For Pierre Pflimlin, then Minister of Agriculture, this new project of sectoral integration had two functions: first of all, the creation of a European agricultural area, competitive on a global scale and able to serve as a solution to the problems raised by the supply of Europe and the development of its agriculture; on the other hand, this project would also serve France’s own interests by ensuring new outlets for certain products that were then in overproduction, such as wheat, butter and wine. However, there was much resistance to this project and the French government finally preferred to concentrate on the European collaboration launched in the field of coal and steel. In July 1954, after several attempts to bring it back to life, Pierre Pflimlin’s project for a European agricultural organisation was finally abandoned. However, the main ideas of this “green pool” were taken up again when the CAP, the Common Agricultural Policy, was launched a few years later. 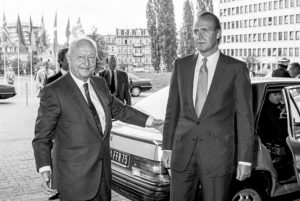 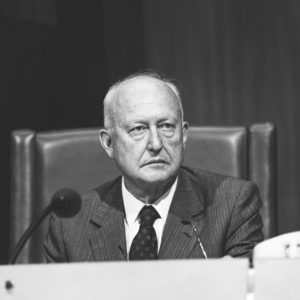 “I am European because I am Alsatian.”

“Since I was a young man, I was convinced that we have to put an end to the hostilities between France and Germany and that Alsace may serve as a link. I experienced the war, it was destroying and we could have thought that it will left behind resentments, delusions over a long period of time. I really felt it was a kind of miracle that only three years after the end of the war, in 1948, men from different countries met in The Hague to say: we are going to create a European Union.”

“I hope that there will be enough men and women determined to undertake this huge task of building the Europe of the XXI century. A Europe of prosperity, yes, a Europe for peace, a Europe which is, above all, determined to assert before the world the primacy of the values of the spirit.”

“I think we should seek a way to conciliate the need of enlargement of the Community – none of us has the right to keep away from the unification process any county of the free Europe – and the need not less important to confer to the Community the cohesion, the dynamism and the efficacy that she need.“

At the official opening ceremony of the ‘Palais de l’Europe’ on 28 January 1977, following the city’s donation to the European institutions of the building land required, Pierre Pflimlin, Mayor of Strasbourg, speaks on behalf of the people of Strasbourg, welcoming the new building, which has been designed to meet the requirements not only of the Council of Europe but also of the European Parliament and represents a promise of unity in the future.

In this interview, Paul Collowald, then Head of the Private Office of Pierre Pflimlin, President of the European Parliament, describes the discreet but significant role played by Pierre Pflimlin from 1984 to 1987 as President of the European Parliament and, in particular, his contribution to the realisation of the Parliament’s budgetary powers when the Community budget was being finally adopted.

Interview with Pierre Pflimlin : The Council of Europe (5 March 1998)

Address given by Pierre Pflimlin to the Council of Europe (Strasbourg, 24 September 1962)

On 24 September 1962, Pierre Pflimlin addresses the Assembly of the Council of Europe in Strasbourg. In this, his first speech since his resignation from the French Government, he denounces General de Gaulle’s European policy.